Welcome to Art with Mrs. Owens

Art will look a little different this year: students will have art in their classroom and will be receiving their own individual art supplies that they will use throughout the year. These supplies will not be shared with anyone else. Students will learn how to care for the materials, use them responsibly and safely, and learn many art techniques, from watercolor painting to oil pastels. We will explore different categories and topics within art, such as landscapes and self portraits. Most importantly, we will explore how art can be used as self-expression and as a way make the world a more beautiful place.

Please feel free to reach out if you have any questions: claudia.owens@sau57.org

I'm so glad you could join me for a remote art lesson today! We are going to read story together and then use our imaginations to do some drawing!

1. Watch the video linked below to hear the story, "The Night I Followed the Dog."

2. Get your art supplies: you will need a piece of drawing paper, a pencil, and any coloring materials you have.

3. Maybe you have a dog or another animal at home, think about your pet or make up one from your imagination. What would your dog - or other pet - get up to after you go bed? Does she have a special place that she goes to like the dog in the story? Does she meet up with other animals to go on an adventure? Does she take over the house while you're asleep? Be creative, draw a detailed picture of what you would see if you followed your dog. If you have coloring supplies, be sure to color in your picture, and remember to add lots of details! 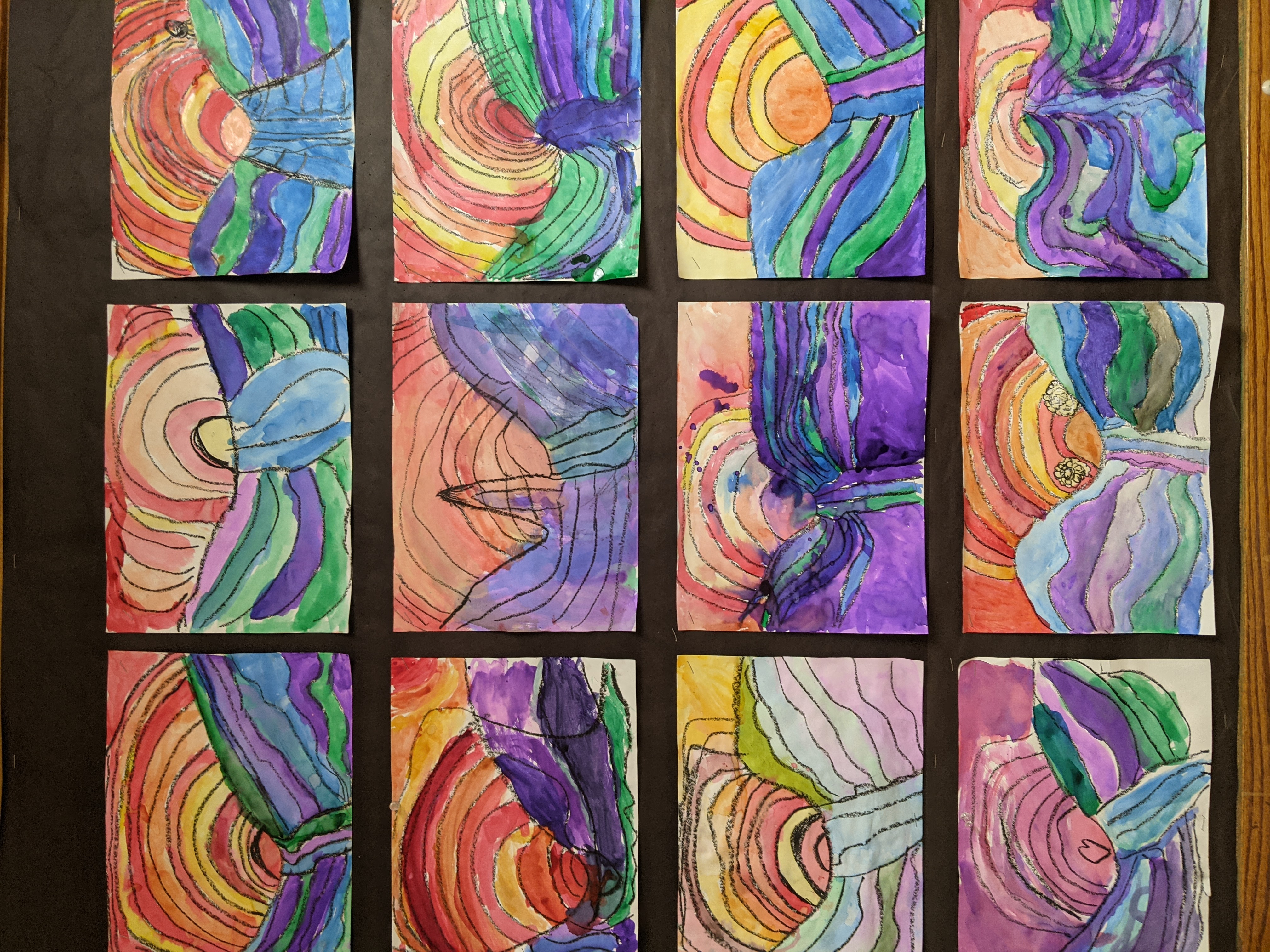 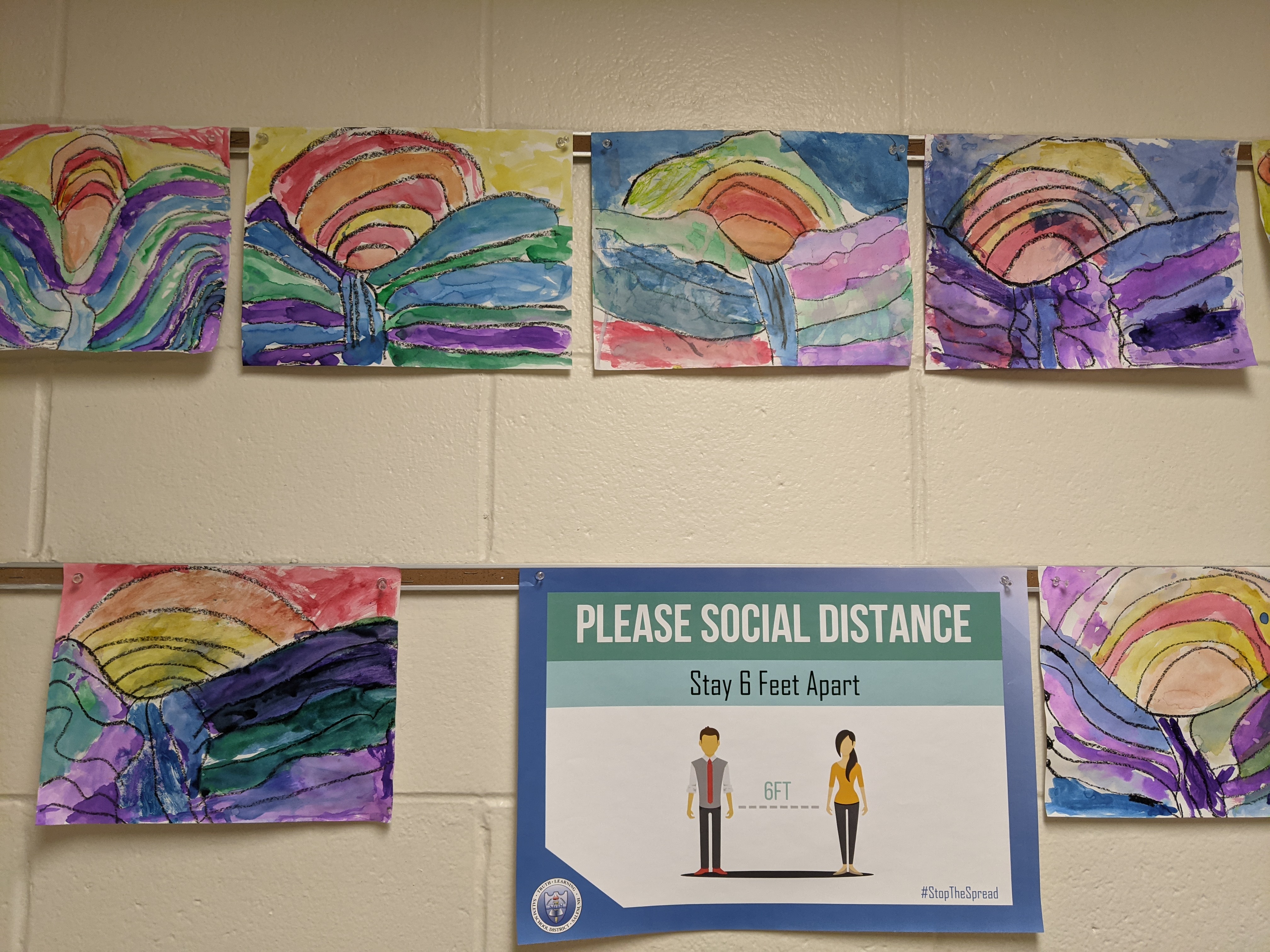 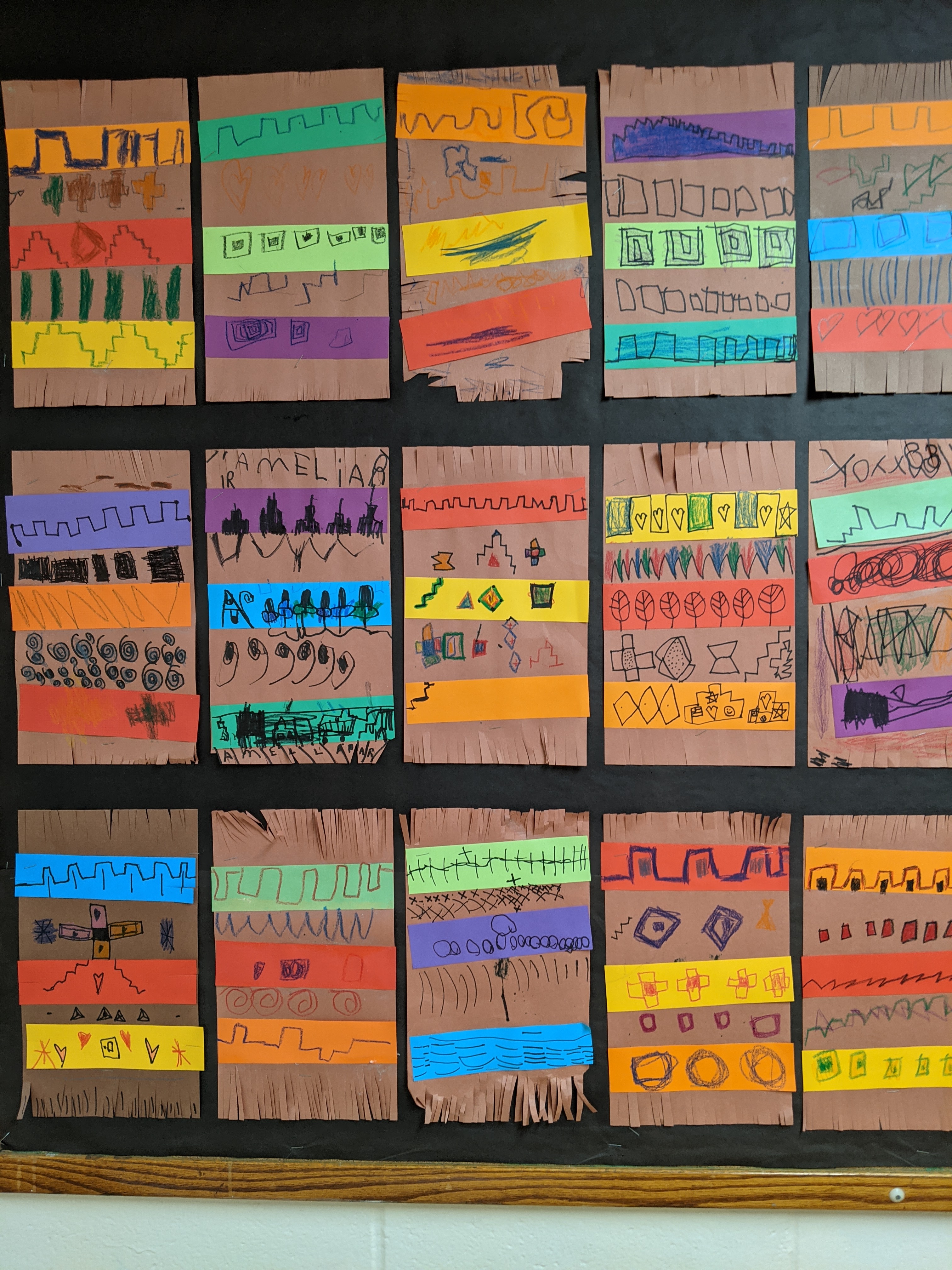 What we're doing in class

This week the 1st graders continued on their Abdulmari fish projects or began the project if they didn't start last week.

We began a new lesson this week, learning about a new Filipino artist, Abdulmari Imao. We talked about his fish paintings, practiced drawing some different fish and learned how to mix colors using the oil pastels.

This week we finished up our chameleons and glued them onto a beautiful background.

This week the 1st graders worked on painting their color wheel chameleons or attaching their chameleons to their backgrounds.

1st graders have started their unit on color! We have been talking about and using the primary colors and have begun to mix these together to make secondary colors. We read the book "A Color of His Own" and have started a "color wheel chameleon."

Mrs. McGlynn's and Mrs. Rasco's class learned how to draw a winter bird and began transforming their painted background into a winter bird scene.

Miss Leonard's class completed their geometric shape cities, finishing to glue their shapes to create the look of buildings.

Mrs. Welch's class learned about the Navajo people and how they made beautiful rugs which served many purposes. We noticed all the geometric shapes. They created their own rug, designing it with at least two different lines and 2 different shapes.

Mrs. McGlynn's and Mrs. Rasco's classes got to paint! Each student received their own paint set and they learned how to paint a wet on wet sky background. This painting will turn into something next class!

Ms. Leonard's class discussed families of shapes - the organic and geometric shapes. We looked more closely at organic shapes and used a piece of string to help us create a big organic shape which we then turned into a crazy creature!

Mrs. McGlynn's and Mrs. Rasco's class learned about the Navajo people and the beautiful rugs they create. Their rugs served many purposes and we noticed how many geometric shapes and lines they used. We began creating our own versions of these rugs using lines and shapes.

The other 1st grade classes finished up their geometric shape cities.

Ms. Leonard's class continued our work on our Romero Britto inspired pumpkins. We added line designs and began coloring in the neatly with crayons.

This week 1st graders in Mrs. McGlynn's and Mrs. Rasco's class finished up their organic shape monsters. We then reviewed and talked a bit more about the other family of shapes - geometric shapes. We looked at the work of one artist in particular who uses a lot of geometric shapes that end up looking like cities and villages, Paul Klee. We began to color in geometric shapes to create our own cities.

This week Ms. Leonard's class began learning about the Brazilian artist Romero Britto and learned how to draw a pumpkin.

Mrs. Welch's class finished up their Romero Britto pumpkin project by adding line designs to their artwork and coloring it in neatly and completely.

Mrs. McGlynn's and Mrs. Rasco's class began a new unit, learning more about shapes. We learned that there are 2 groups of shapes, organic and geometric. The students created a creature by creating an organic shape with string for the body.

Ms. Leonard's class was introduced to lines this week, we met a special friend who taught us about lines and read a book about lines. We then had some time to find some around the classroom and create some of our own.

Mrs. Welch's class created 3D line art by creating lines with strips of paper - folding, bending or wrapping the paper - and gluing it onto a background paper.

Mrs. McGlynn's and Mrs. Rasco's classes learned about a new artist, Romero Britto and learned how to draw a pumpkin in his artistic style.

I met my Monday and Tuesday classes for the first time this week, we learned about and received our art sketchbooks for this year and talked about what art class will be about this year and began our unit on Line.

My other classes continued on line, reviewing what we learned last week. Then we created 3D lines by twisting, bending, and folding strips of paper and gluing the ends onto another piece of paper.

We have begun our exploration of LINES: we learned what a line means within art and spent time identifying and creating them.

It was so wonderful to see all everyone again, and to meet some new artists! For our first class together we were introduced to the sketchbooks that we will be using this year and created our first piece of art together! We made an "inchie" - which is a very small piece of artwork. On our "inchie" we put the first letter of our name and a drawing of at least 3 of our favorite things. It was really fun to learn more about everyone.