The SHS varsity soccer team is used to running. But on this cold October morning they walked onto Grant Field with a renewed sense of purpose. Today they would be running for their fellow classmates; for members of the school community; for the End 68 Hours of Hunger initiative.

The boys soccer team hosted a 5K Run/Walk to raise money for the local charity as part of its community service project. “One of the goals for each athletic program at SHS is to contribute to the community in some way,” said first-year varsity Coach Justin Golden. “We chose this charity because of the way it directly helps the students and families within Salem.  We wanted to make a difference in our community and help the students in need.”

The Salem End 68 Hours of Hunger program provides food for local families on a weekly basis to cover the time between school lunch on Friday and school breakfast Monday morning. As of the end of the 2014-15 school year, the program has served 52 students in 24 families across the district.

Coach Golden hopes the effort will instill a sense of responsibility to the community within his athletes. “We want the student-athletes to be civically aware and responsible citizens,” he said. “This is an important life lesson that will benefit them all in the future.  Soccer is just a game, but being charitable/responsible is a life skill that transcends sports.”

More than 40 athletes participated – including community members not associated with the soccer team. The event was a success on multiple levels, said Golden, raising $1,750 for the charity and raising awareness for his student-athletes. 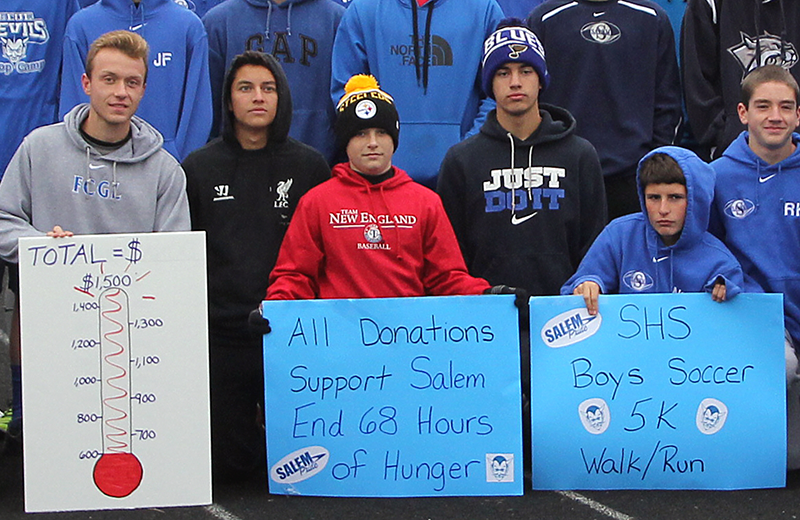