RMS Titanic, Inc. - The exclusive steward of the RMS Titanic.  The Company is dedicated to preserving the legacy of the Ship, wreck site and all her passengers and crew through educational , historical, scientific and conservation based programs. 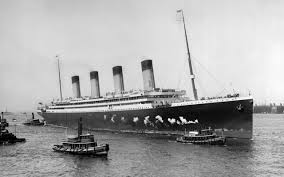 Royal Mail Ship (RMS) Titanic, British luxury passenger liner that sank on April 14 - 15, 1912, en route to New York City from Southampton, England, during its maiden voyage, killing about 1,500 passengers and ship personnel. One of the most famous tragedies in modern history, it has inspired numerous stories, several films, and a musical, and has been the subject of much scholarship and scientific speculation.

The Titanic was one of the largest and most luxurious ships in the world. It had a gross registered tonnage (i.e., carrying capacity) of 46,329 tons, and when fully laden the ship displaced (weighed) 66,000 tons. The Titanic was 882.5 feet (269 metres) long and 92.5 feet (28.2 metres) wide at its widest point. It was designed and built by William Pirrie’s Belfast firm Harland and Wolff to service the highly competitive Atlantic Ferry route. It had a double-bottomed hull divided into 16 compartments that were presumed to be watertight. Because four of these could be flooded without endangering the liner’s buoyancy, it was considered unsinkable.

Thanks to Kathy Hempel at Station Middle School, Barrington IL for her help in the creation of this libguide.