World Language Teacher of the Year: Exposing Students to a Broader World

BRINGING JOY TO LEARNING   |   Return to Possibilities...
EXPOSING STUDENTS
to a Broader World

Salem High School is proud to announce that Mrs. Karen Cox has been named the 2020 New Hampshire World Language Teacher of the Year.  Since 2000, Mrs. Cox has been an excellent, creative, and innovative world language teacher at Salem High.  She is a leader in world language in school and the community. Mrs. Cox is continually active in world language professional development to improve her skills, specifically in the German language.

Mrs. Cox led the Salem High School World Language Department in their implementation of standards-based grading in 2007.  She served on the 2007 Block Scheduling Committee, the 2014 NEASC Curriculum Committee, and the 2016-2018 Master Schedule Design Team which resulted in a new schedule for Salem High School students this year.  Mrs. Cox organized professional development for both the middle and high school world language teachers around second language acquisition research and took the lead on the SLA/CI movement.

“Mrs. Cox has a reputation of being a caring teacher that makes her classes fun while teaching her students language skills that they will remember for years to come,” says colleague Lynda Coffill.  She is the advisor for the German Club at Salem High and Woodbury Middle School, advisor for the LGBTQ+ Club, and was class advisor for the Class of 2004.  She sponsors trips to Germany for both staff and students and every other year welcomes German students to Salem to experience our culture. Her professional resume is extremely impressive.  She belongs to ACTFL, is a member of the NHAWLT board, an AATG officer, and a presenter at both the ACTFL and NHAWLT conferences.

Mrs. Cox was recently named the Greater Salem Boys & Girls Club Educator of the year and will be recognized at an upcoming ceremony.  Congratulations to Mrs. Karen Cox for being named the 2020 NHAWL Teacher of the Year. 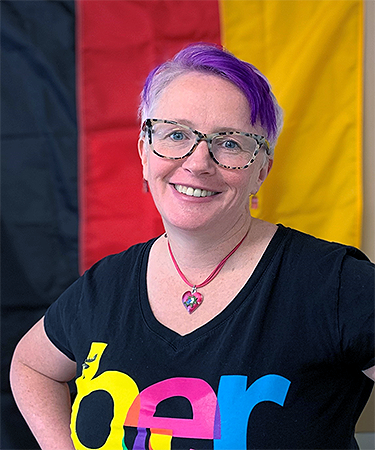